I expain my code for a 2D halo exchange of unstructed mesh blocks (boxes) using message passing interface (MPI). The halo can have any thickness. The periodic condition is also supported. The blocks can have different sizes and location in space. Thanks to MPI self-send/receive, a CPU can run multiple blocks.

The full code is on GitHub.

This post is continuation of halo exchange for structured blocks.

Imagine we have 2D Domain made of mesh blocks like below: 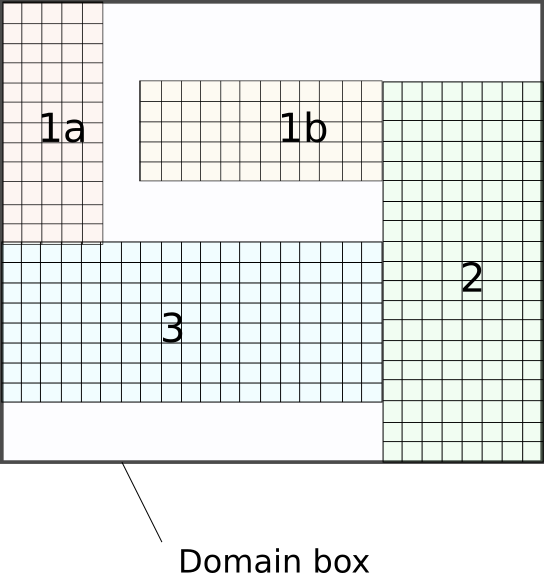 These blocks need to send and receive border area to form their ghost or halo layer.

It looks a bit complex, how can we set communications between blocks?

I explain the solution with an example. Let’s only focus on block 1a and 3 and assume the halo thickness is 2 cells: 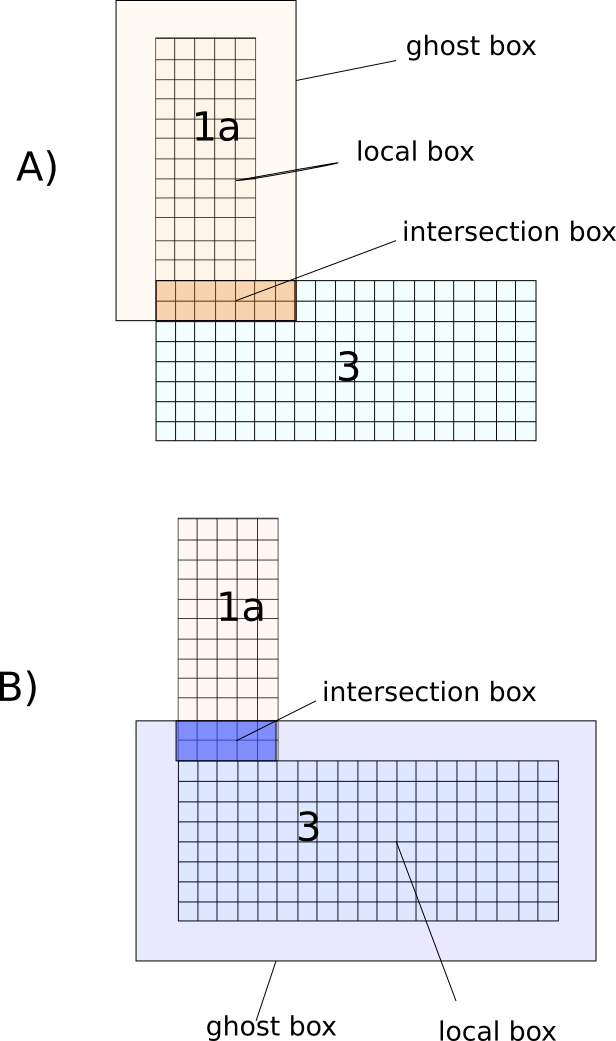 That is it! we repeat this procudre for every two blocks in the domain and we record neighbors and their corresponding send-receive subarrays.

To separate concepts, we define Box class to represent boundaries of a block and intersections. The class contains all the necessary functions for our job:

The good thing is that Box class is about geometry and nothing else.

A block contains the nodes (or cells) data. It manages a 2D array of nodes. A block array contains the halo (ghost) nodes as well. To initialize a block we pass the physical boundary of a block via a box, but block automatically adds the halo nodes to it. Node ix,iy=(0,0) is the first halo node at the bottom-left of the block. For a domain with halo thickness of 2, the physical node start at ix,iy=(2,2).

This picture explains the difference between global and local positions. Box 2 extends along x-axis from 19 to 26. But in local reference, in a block, it is between 2 and 9. In the local reference, cells 0 and 1 belong to the halo (ghost layer). 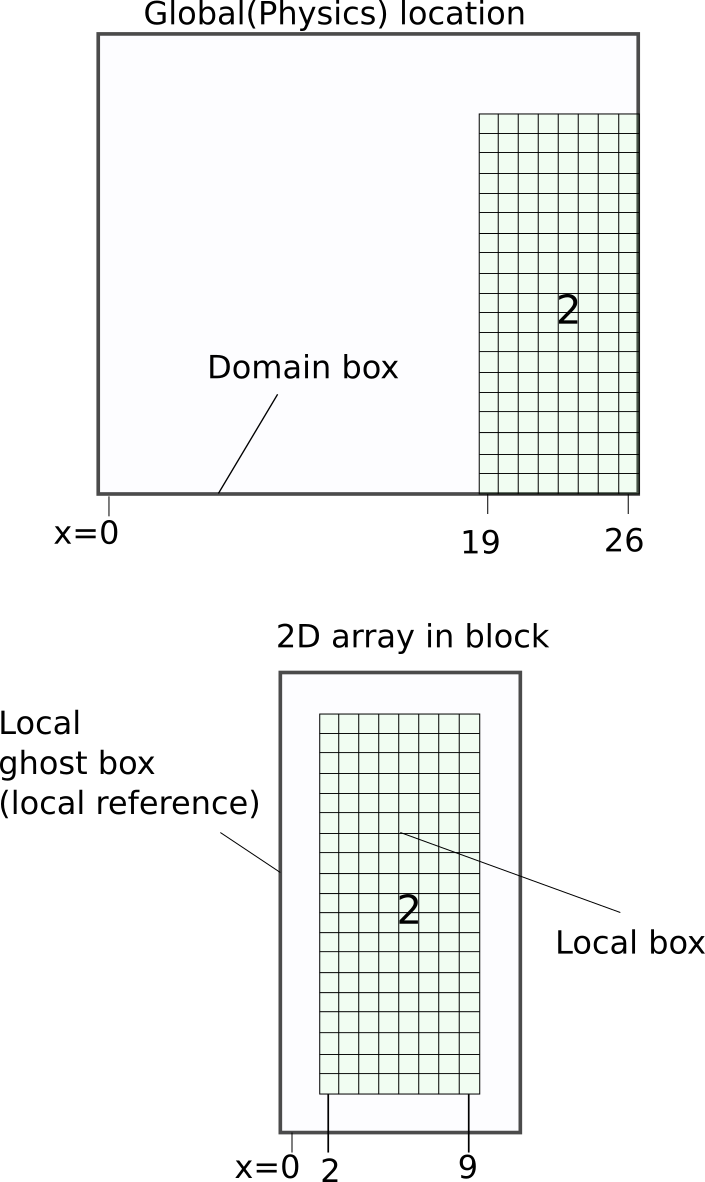 HaloManager class receives a list of boxes (block physical boundaries) and their processor ranks which are called BoxRanks in the code. Then it finds the neighbors and subarrays for each block.

The core function is

where a focused box (or block) is received and all neighboring blocks are assessed to see if they have an intersection with it. If there is periodic boundary, it also checks the periodic image of the neighbors in all 8 directions:

For example the intersection of block 2 with block 3 and its periodic images are found like this figure: 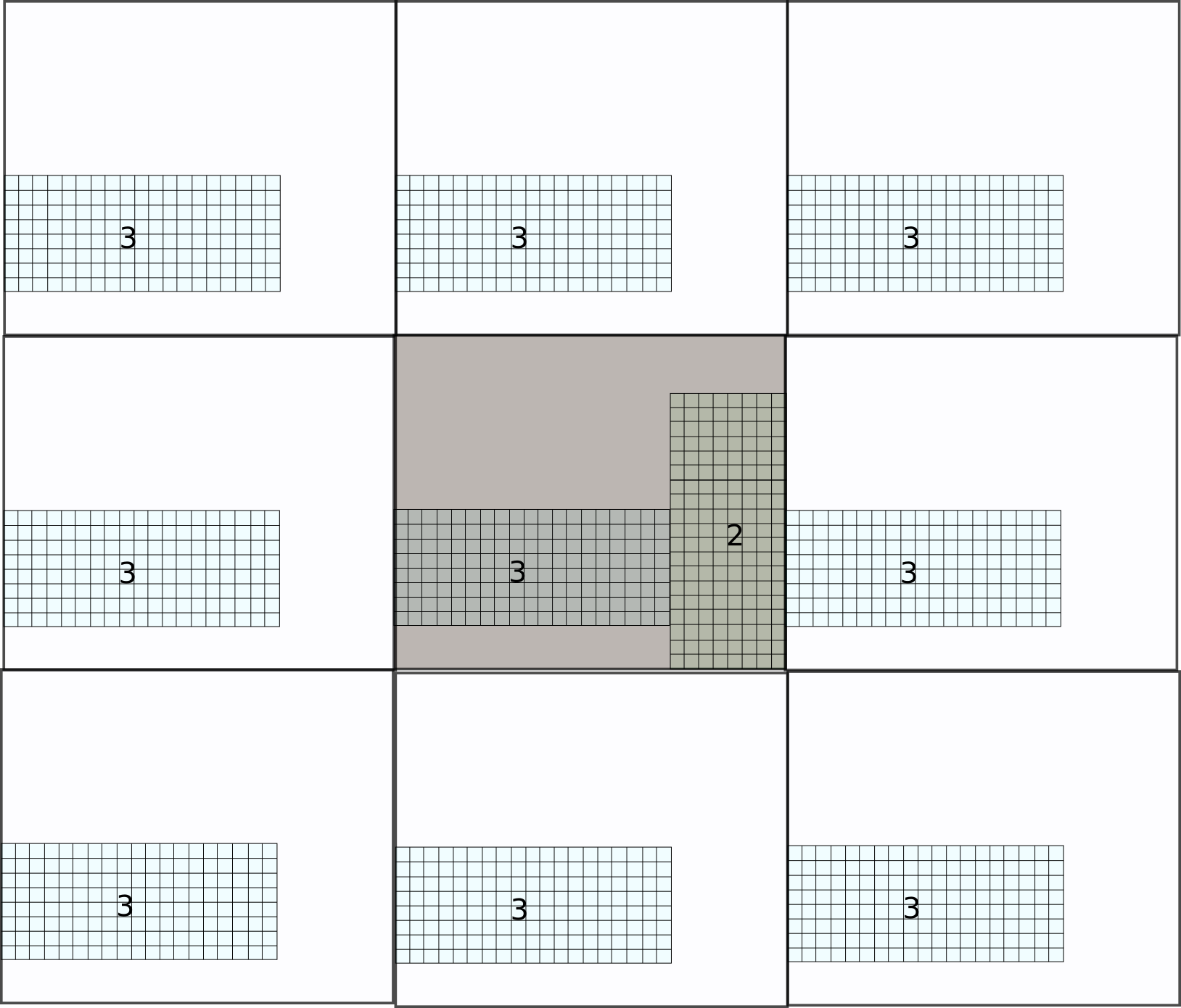 The detail of adding a neighbor to our list is in this function:

CpuBlocks class is created to wrap everything in a higher level interface. It stores a list of communications where each one focuses on one block and its neighbors. CpuBlocks also runs communications for all blocks.

The code contains one example that shows how to work with the interface.