From lvalue, prvalue, and xvalue to move semantics in C++

In C++ values are divided into different categories. Knowing them helps us understand the compiler’s behind the scene actions and optimise them to our benefit.

So in the example above y is an lvalue and 5 is an rvalue. Because a statement like 5 = y is not allowed.

In modern C++, things got a bit more complex, nowadays we have lvalue, prvalue and xvalue.

Generally, a named variable that we can have it on the LHS of an assignment:

A prvalue or pure rvalue can only be at the RHS of an assignment.

A temporary object is created with a literal, then it is passed to the LHS or lvalue.

The result of a function returning by value is prvalue:

Objects which are created without names

The list of prvalues is longer than this but a simple test to know if an RHS is prvalue is to switch LHS with RHS, and seeing whether it makes sense:

We have the same for rvalues. An rvalue reference is defined as T&& and it only binds to rvalues

In the previous section, I mentioned rvalues are destructed when we hit ;, but we have an exception here. The lifetime of rvalue 5 is extended to the lifetime of y due to the binding.

Note that we wrote y=7, therefore, a named rvalue reference is lvalue. To prove that see this one:

We can overload a function based on a parameter being lvalue or rvalue: 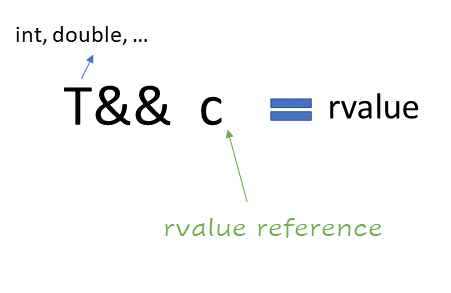 We can improve code efficiency by making use of resources of an rvalue. I explain it with an example. We have Player class as

We have a team class with three constructors

There are situations that a programmer knows that an lvalue object will be destructed soon and wants to take its resources using a move constructor/assignment. std::move casts an lvalue to an unnamed rvalue reference type. Note that std::move doesn’t move anything it is just a static cast without computational cost.

Now let’s define an lvalue object and cast it to be an rvalue:

In the above example, temp is going out of the scope to be destructed. Before that happens, we cast temp to rvalue reference with std::move then pass it to move assignment of Barca.

Graduating std::move, now we can define xvalue. An expiring value or xvalue is a value that is about to die so we can steal its resources. The result of a function like std::move() which returns an unnamed rvalue reference, T&&, is an xvalue:

A cast to an rvalue reference is an xvalue:

An expression to access a member of an rvalue object is an xvalue:

Where to use move semantics?

The best place to take advantage of move semantics is move constructors and assignments for classes that have movable data. In this way, we avoid the deep copy of rvalues.

However, I wouldn’t employ them in every class because the speed gain would be in assignment and constructor calls. The improvement in those actions is hardly visible if we are not moving massive objects many times. On my laptop, the deep-copy of a vector of 1 million doubles takes only 1 millisecond. Moreover, adding move constructors/assignments and std::move, st::forward and related commands makes the code harder to read and maintain. Furthermore, there are cases that a compiler itself reduces the number of objects created (Copy elision). So, if the performance gain is negligible move semantics are better to be avoided.

There are, of course, other scenarios. For example, if we write a generic library that is supposed to be used in other projects. It will be more likeable to others if the API of the library supports the move semantics.