How to use C++ raw pointers properly?

C++ is used widely for high-performance computing. Mastering pointers is an important step in writing efficient code. In this post, I mention the most useful characteristics of raw pointers with examples.

Here I focus only on raw pointers and assume the code we are working with doesn’t allow smart pointers (unique, shared and weak pointers).

A pointer is an 8-byte type on a 64-bit machine that holds the memory address of a target object.

In the above example, p at the beginning is declared but undefined (it points to somewhere we don’t know); it then pointed to x. Roughly, the code is equivalent to the picture below 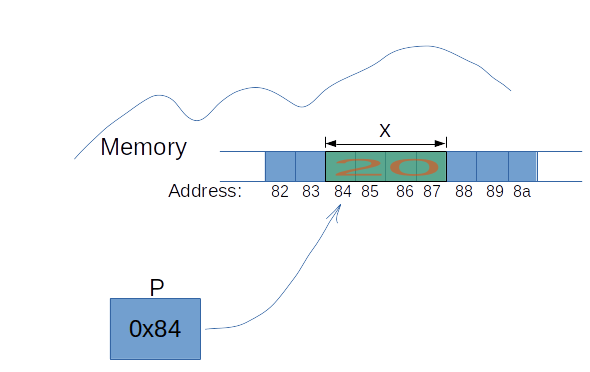 The pointer holds the memory address of x. Using * operator, the pointer can be dereferenced to get the value of its target.

A pointer is usually pointed to dynamically allocated memory on the heap, a scalar 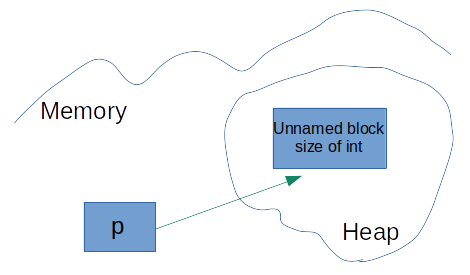 The allocated memory can be deleted (not the pointer itself) 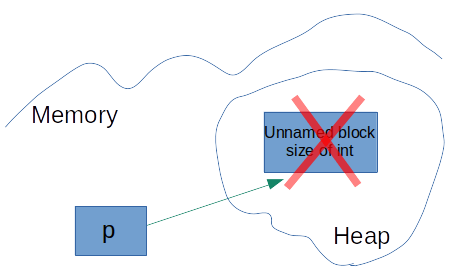 To delete all elements of the array

Note that they are not literally deleted, the memory is marked as free to be overwritten.

Do not delete the dynamically created array using delete

Do not delete a stack memory that a pointer points to

Do not double delete

There is no way to know if a pointer is deleted or not associated, therefore, I prefer to point the pointer to nullptr (or NULL for C and older than C++11 compilers) when there is nothing to point to: at declaration and deletion. In this way, some undefined behaviours like double-delete are avoided.

nullptr is type-safe in comparison with NULL. In some cases, compilers confuse the type of NULL with int. We can check if a pointer is null like below

It should be noted that making a pointer null after delete hides the double-delete problem explained in the previous section. And it does not affect other pointers pointing to the same deleted memory. Some people don’t like this convention read here.

There is no memory management system for raw pointers. Therefore, not deleting the allocated memory of pointer explicitly causes memory leak:

In the above example, new int memory is an island in the sea of computer memory. We could only find it via p but, in the last line, p is pointed to another place, x. So we have a memory leak! 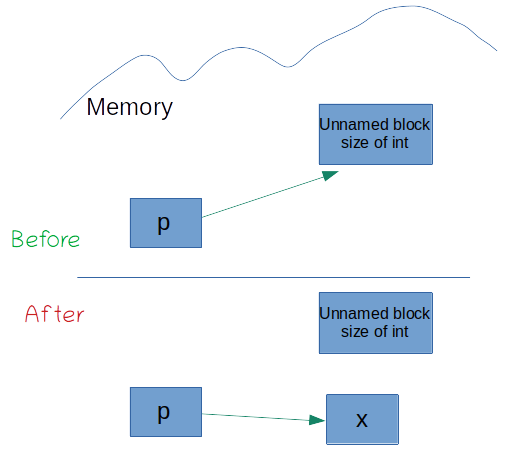 We have to remember to delete the allocated memory and then point the pointer to another target:

The same happens if the pointer goes out of scope

Again we have to remember to delete it ourself:

There is another situation that memory leaks:

A raw pointer cannot handle this, you need to use smart pointers (see this discussion ).

For deleting a memory, the situation gets complicated fast when it is the target of different pointers:

In the above example, three pointers target the same memory location, thus we cannot run delete for all of them as we face double-delete problems explained in the Delete section.

If you start working with an existing project, look for pointer conventions in place. If you design a new code put some conventions in place for objects which delete pointers, and the ownership of pointers when they are passed to or returned from functions/objects.

For example, in the previous piece of code, we have to decide which object is the owner, i.e., which one needs to outlive others. So we delete the pointer in that one and leave the rest as observers.

We can have owner as a type alias for T.

Now we can have a pointer policy for our code that pointers are defined by owner only when the class containing them is responsible for deleting them.

A simple example that owner acts as a raw pointer:

Note that smart pointers, which are introduced in C++11, elegantly address this problem.

A class member, method or variable, can be accessed via -> operator:

Pass by pointer vs pass by reference

It is a good practice to pass objects especially the huge ones by a pointer. Instead of copying the whole data, only the pointer is passed:

When passing by pointer, the pointer itself passed by value

A constant qualifier can be added to a pointer in different ways:

The different versions are to constrain a pointer, reduce mistakes, improve readability and help compiler to optimise the code and catch errors.

The target of a constant-target pointer is not necessarily constant:

However, a constant target must be pointed only by a constant-target pointer.

A reference member of a class must be initialized in the constructor and it cannot be reassigned. However, a pointer member can be reassigned, freed, and null.

Use a reference member if an entity outside of the class controls the lifetime of the member and the entity outlives objects of this class.

Use a pointer member when

Pointers can be used to define arrays on the heap

The elements can be accessed via [] operators

In C++, we have the vector class which has many features and in terms of read-and-write is as fast as a raw array see here. Generally, it’s better to use a vector than a pointer to create an array. But how to dereference a pointer to a vector? many ways:

All the pointers (int*, double*, string*, custom_class*) have the same datatype holding the memory address of different targets. So, void* pointer is a pointer the same as others pointing to some memory address but the data type of the target is unknown.

It is a C language feature to write generic functions. But in C++, knowing void* tricks are not necessary since generic code can be elegantly written with templates, functors and interfaces.

Reading pointers, we can understand how data are spread in the memory. We can also check the contiguity of objects. Pointers are printed in hexadecimal (hex) system which includes 16 (or 2⁴) characters {0-9,a-f} .